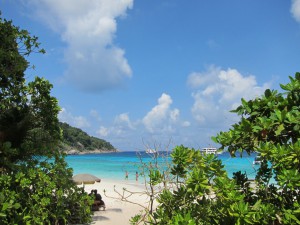 Changing winds and isolated rainshowers announce the upcoming storm season. Although the general weather situation is expected to stay mostly calm for at least the beginning of May. The days start mostly sunny with north to northwesterly winds. Clouds build up during the day and from late afternoon on isolated rainshowers cross the sea over the similans. Wave height are still below 1 meter, but the increasing and changing winds can build up certain types of short length waves, which are uncomfortable to ride on in the usual day speedboats. Temperatures stay constantly at 29-30°C (86-88°F) and drop only for a short time near the rainshowers, which are also often accompanied by wind gusts.