Similan Opening Update – The State of the Islands October 2014 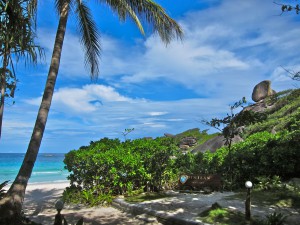 The Mu Koh Similan Islands National Park has opened its gate for visitors on 15th October 2014. Every year a couple of tourguides come to inspect the islands and the reefs for a full assessment of underwater life and coral health. This year the inspectors found the reefs in better condition compared to last April and also a higher amount of fish life could be witnessed. The corals, especially at depths below 10 meters, have recovered and grown at the same pace found in the low seasons of 2012 and 2013 which indicates favourable water temperatures around 27°-28° throughout the monsoon months. At the western reefs of Deep 6 and West Of Eden were good amounts of fuseliers, goat fish and trevallies. Even a couple of sharks were seen by the inspectors.

Heavy Westerly Winds between May and October

The islands themselves seem to have been hit by regular strong southwesterly winds as the shape of most trees indicate. The visitable islands Nr. 4 and Nr. 8 are now prepared to welcome more daytrip tourists than the seasons before as facilities have been renewed and park ranger personell was increased.

These findings were only a first glance, there are several scientists from Phuket Universitiy about to visit the islands in November and their report will give a definite roundup about the health of the reefs and rainforests.

Generally the islands and its reefs are in the same, or even slightly improved, condition than in April 2014 so visiting the islands and joining diving cruises into the National Park will be a satisfying experience for this seasons tourists.